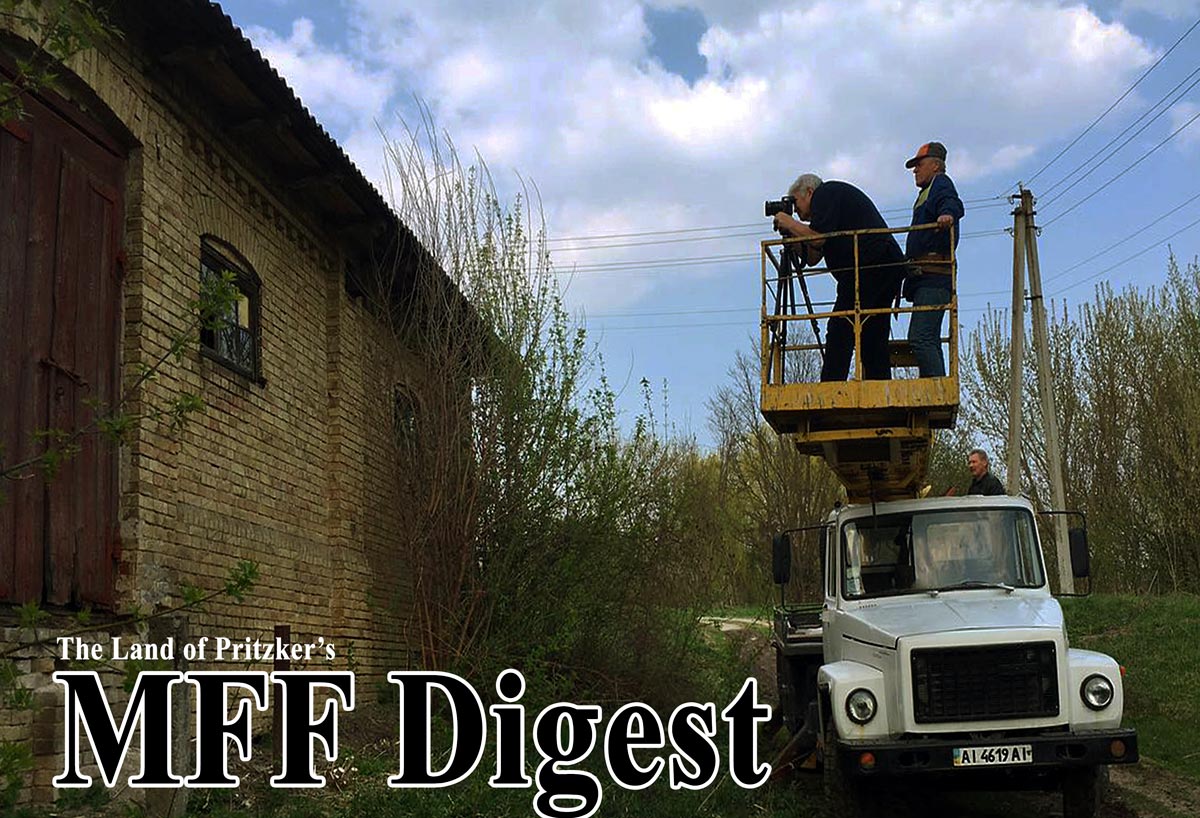 In the photo: Sergey Melnikoff, aka MFF, captured a brick wall with a wide double door. Ukraine, Velyki Prizki village. 2019

— It would be possible to mention that there is an example of the cultural interpenetration, as well as the actualization of Christian symbols in the Jewish paradigm. This process is largely due to the Jewish origin of Jesus. However, in our opinion, this conclusion will be partly true, as the cross and the crucifix are not the Christian concepts only. In essence, these are ancient Jewish archetypes that fell out of the principal Jewish tradition and were revived to life after almost two dozen centuries.
— Yuri Tabak 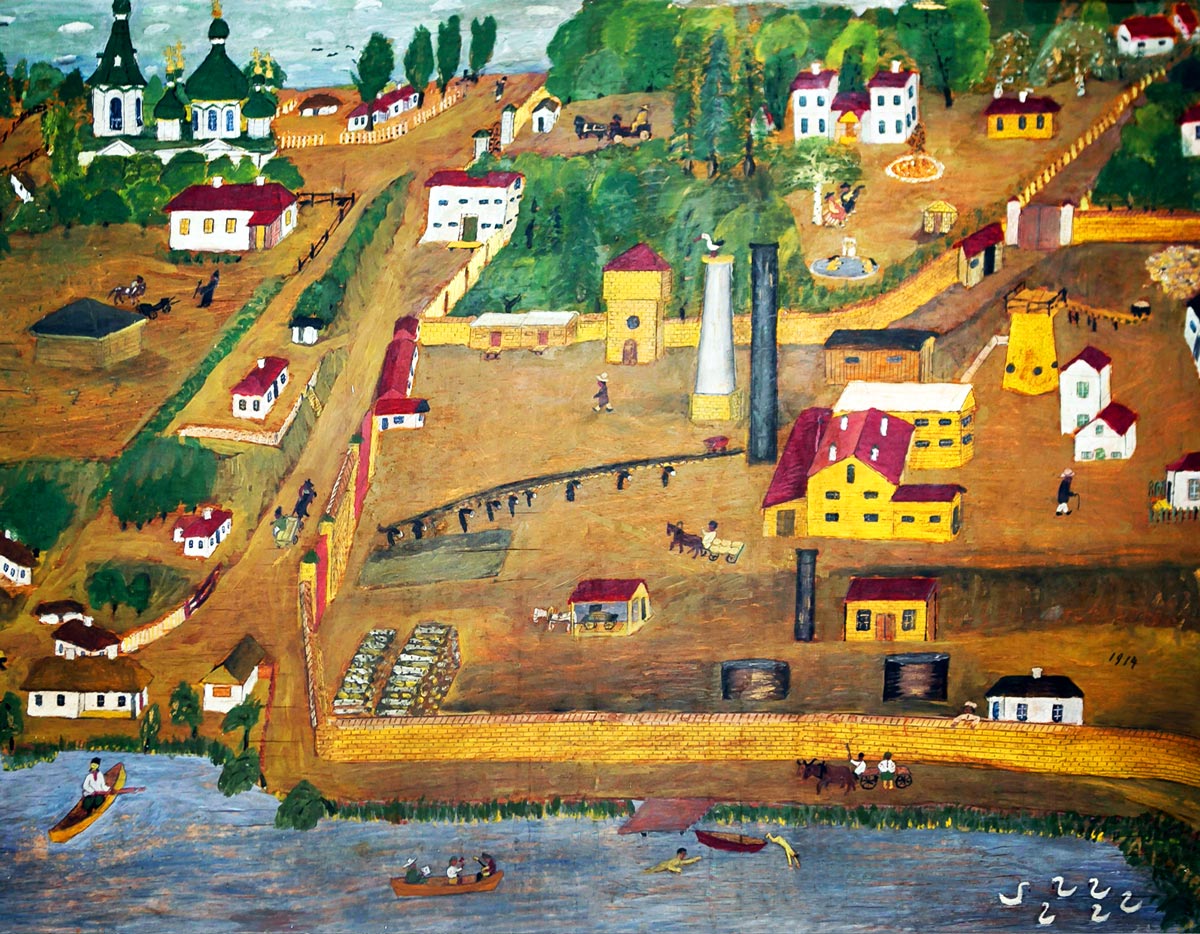 In the photo: A 1914 painting depicting a sugar factory in the village of Velyki Prizki.

The symbolic work titled «The Land of Pritzker’s» by Sergey Melnikoff is addressed to the «Great Migrants,» with a personal dedication to Penny Sue Pritzker, the dynasty descendant.

An ancestor of the dynasty, Jacob Pritzker was born in 1831 in the Velyki (Great) Prizki village, situated near Kyiv, Ukraine. He was the manager of a local sugar factory.

Pritzker, along with his son Nicholas, immigrated to the United States of America in 1881, when the Jewish pogroms started. Later, assisting Jews from Eastern European countries became one of the most important affairs of this family, the fortune of which is considered to be among the most impressive in the world. Their dynasty also created the outline of modern-day Chicago. 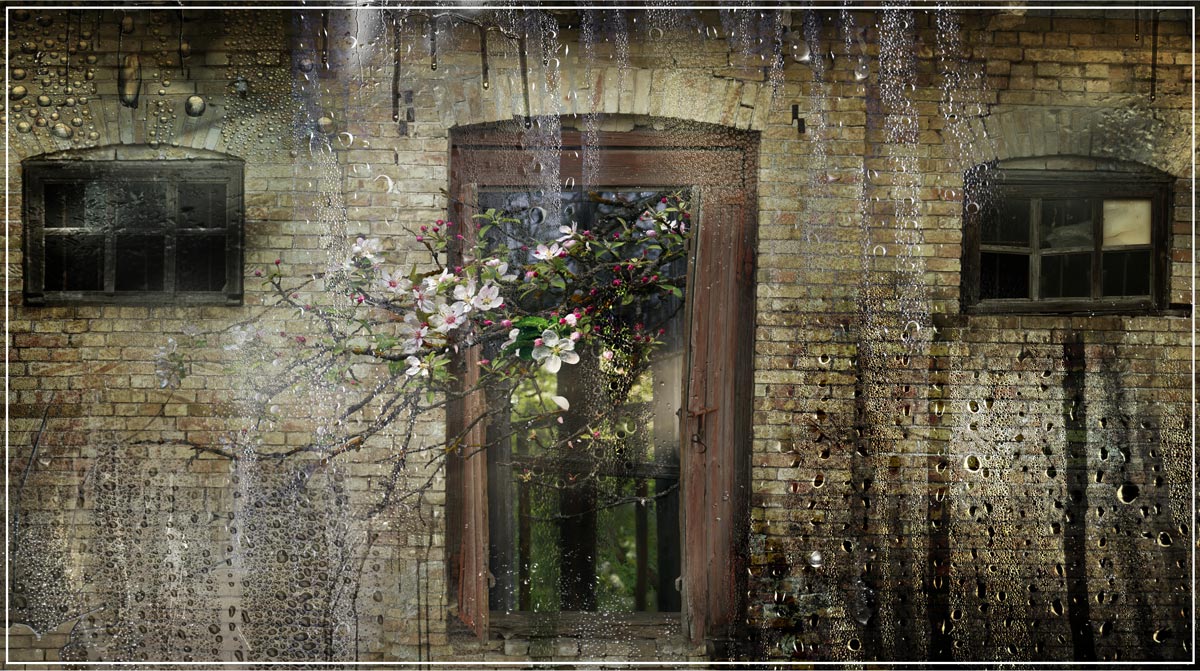 In the photo: «The Land of Pritzker’s» by MFF. The central part of the triptych.

In this monumental, multi-layered work, the audience experiences the author’s dramatic reading of Robert Heinlein’s impressive «The Door into Summer,» about a brilliant inventor who has managed to change the entire world on his own. Furthermore, returning the audience to the cycle of Marc Chagall’s crucifixes, «The Land of Pritzker’s» breaks down the 2000-year old symbolism of the Jewish religion, including elements naturally associated with fear, persecution, suffering, and death in the Jewish religious consciousness.

One ancient archetype, particularly, is introduced by the symbolist artist differently. The turning point associated with the complex processes of the cultural integration of Jews into the life of the surrounding Christian world, i.e., the series of pogroms or the global crisis caused by, first of all, the First World War and the Red Terror at the beginning of the twentieth century.

«The Land of Pritzker’s» is a metaphorical symbol of all Aliyah, which carries an immense depth.

In this work, the hidden Christian topic becomes no less an essential source of inspiration than the Hasidic folklore. «The Land of Pritzker’s,» together with the Jewish literature of the end of the Second Temple and the Mishnah period, provides an example where the cross is considered not only as an element that doesn’t detract from the high value of the crucified individual, but as one that also emphasizes it. 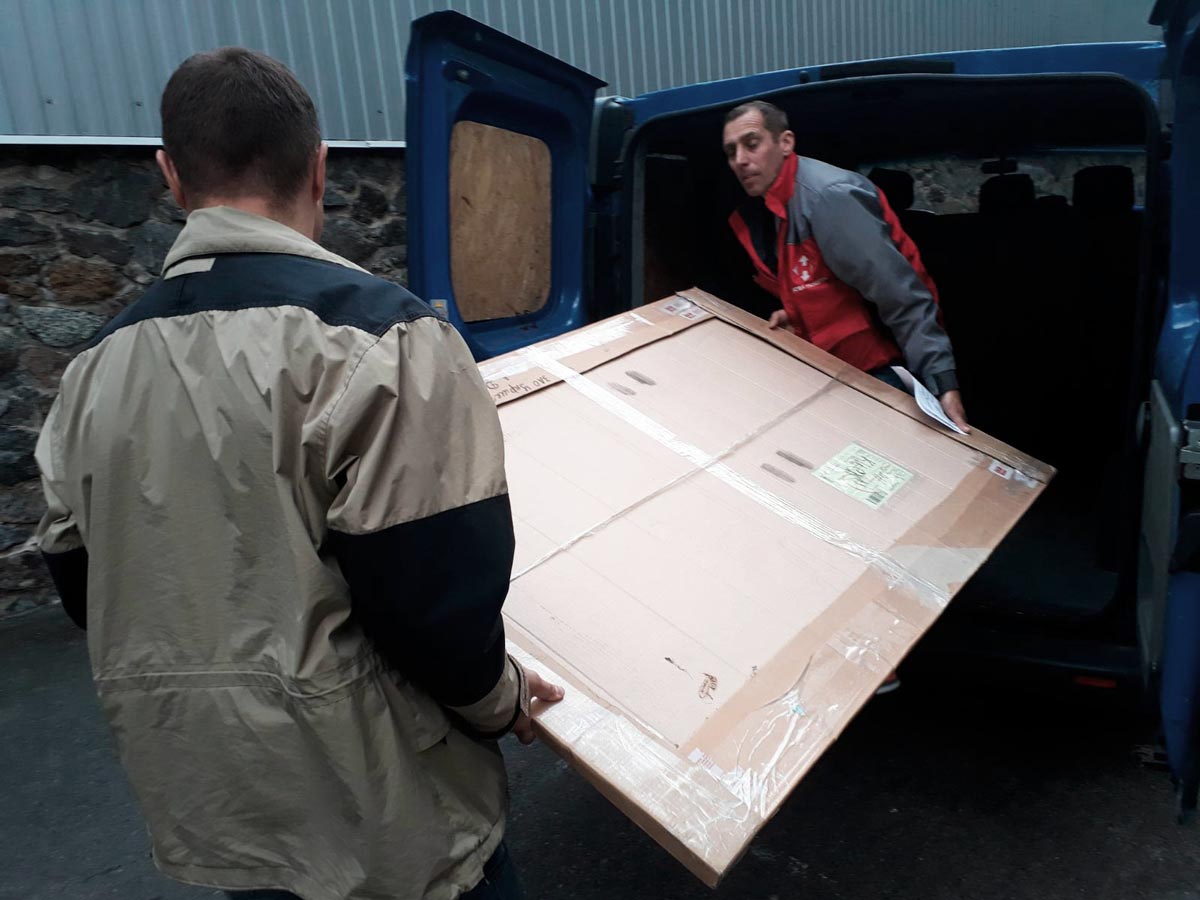 In the photo: «The Land of Pritzker’s» by MFF. The central part of the triptych was delivered from the printing house to the MELNIKOFF Gallery.

«The Land of Pritzker’s» tells the story of victory over suffering in an artistic manner, not only from the Jews’ side but also all of humankind. It represents the victory of God over Satan. The most profound aspect of this piece of art is the Cross of Jesus, a universal symbol of suffering. As the work of an artist, the triptych is presented as a symbol of the Redeemer that is equal to the Jewish Messiah.

This great spiritual message shows the image of the cross in the 19th-century cemetery in the village of Velyki (Great) Prizki. Also, it should be mentioned that this cross is not made of wood, as might have been expected. It is an artistic casting of metal done in the smoke of the ash. There is an astonishing symbol that surpasses the majestic picture of Ephraim Moshe Lilien, dedicated to the martyrs of the Chisinau pogrom. It contains the image of an old man dressed in a tallit and crucified on a cross. In his hand, he holds a Torah scroll, with an angel supporting him. 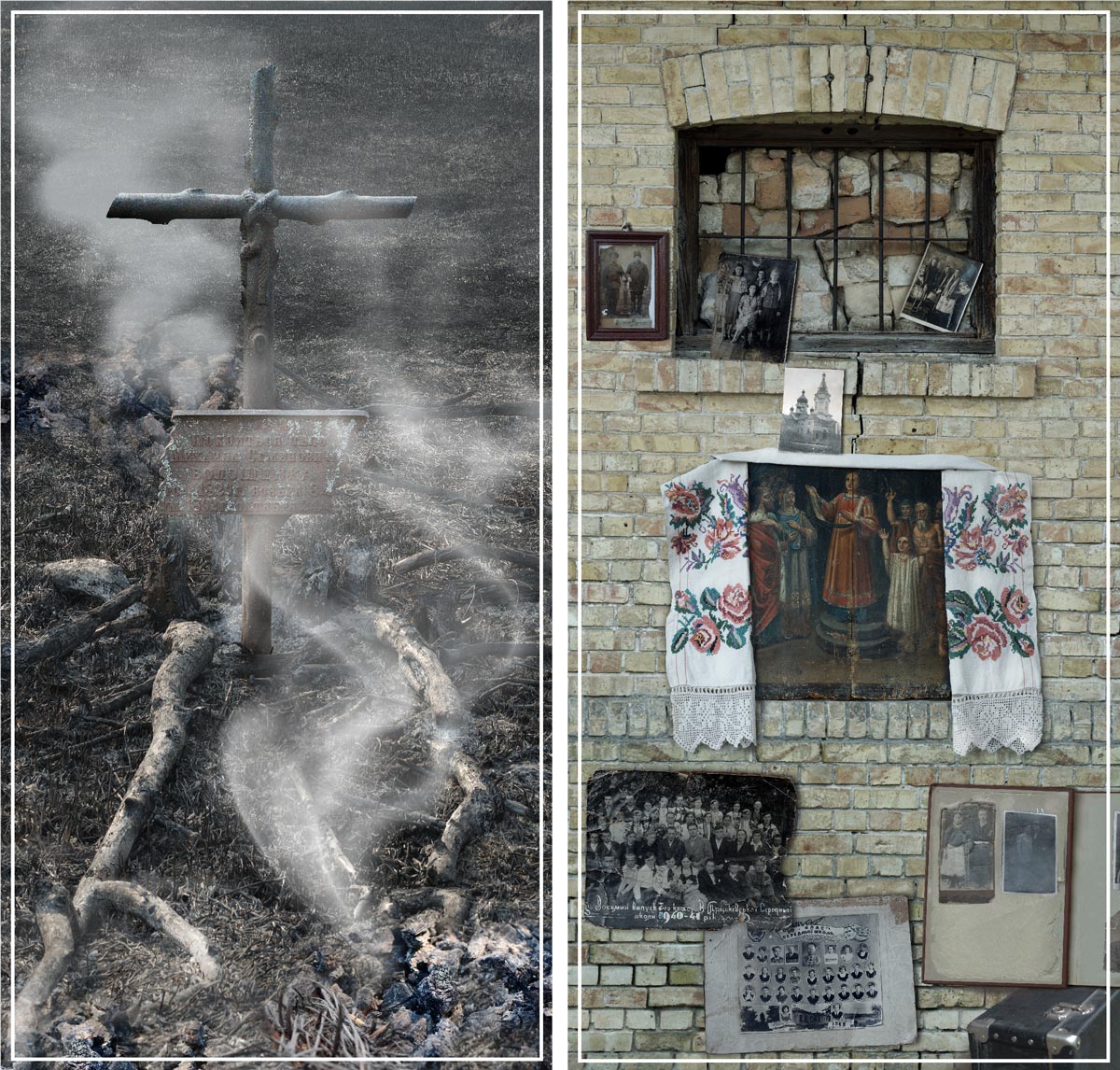 In the photo: «The Land of Pritzker’s» by MFF. The right and left sides of the triptych.

Moreover, the theme of the Cross Gospel anguish appears in a new light and once again reveals the absurdity of the anti-Semitic cliché — the «people-deicide,» «Jews who crucified Christ,» etc., which ushered in the Christian anti-Semitism. In this case, the Jewish theology of the crucifixion could play a positive role here.

Another part of the triptych «The Land of Pritzker’s» is dedicated to the history of the village of Velyki Prizki. The master of this was on an allegorically complicated material and the basis of the work was represented by the only building that remained from the sugar factory, where Jacob Pritzker, the ancestor of the famous world-wide dynasty, worked.

In the photo, we see a blank brick wall with a window in the upper part. The window is hidden under the broken stones laid between the bars of the iron grating. Some old pictures hang all over the wall. Here, there are photos of a Jewish wedding from the beginning of the last century, taken from a family album, an expensive studio photo of two Ukrainian Cossacks in military uniforms of that period, and group photographs of school classes before and after the Second World War. The family album is kept open and it leans against the corner of a fiber suitcase, a well-known attribute of 19th-century immigrants and another symbol here.

The central part of the work is represented by the same brick wall with a wide double door. A branch of a blossoming apple tree is stretching through an open-door leaf. Behind it, there is a long road in evening sunlight. The central part of the work is covered with a glass that has traces of rain, reminiscent of tears. Sometimes, they are dull and sometimes clear. They resemble the life of a migrant.

The window in the rain traces and the branch of a flowering tree behind a stone wall create a profound allegorical symbol of a person’s fate; someone who has been forced to leave their motherland.

The triptych is supplemented by a fragmented building brick that contains a preserved stamp of its manufacturing time — “878” (the number “1” has been lost). This is a touching and a deeply personal aspect as it’s from the time when Jacob Pritzker was working at the plant. 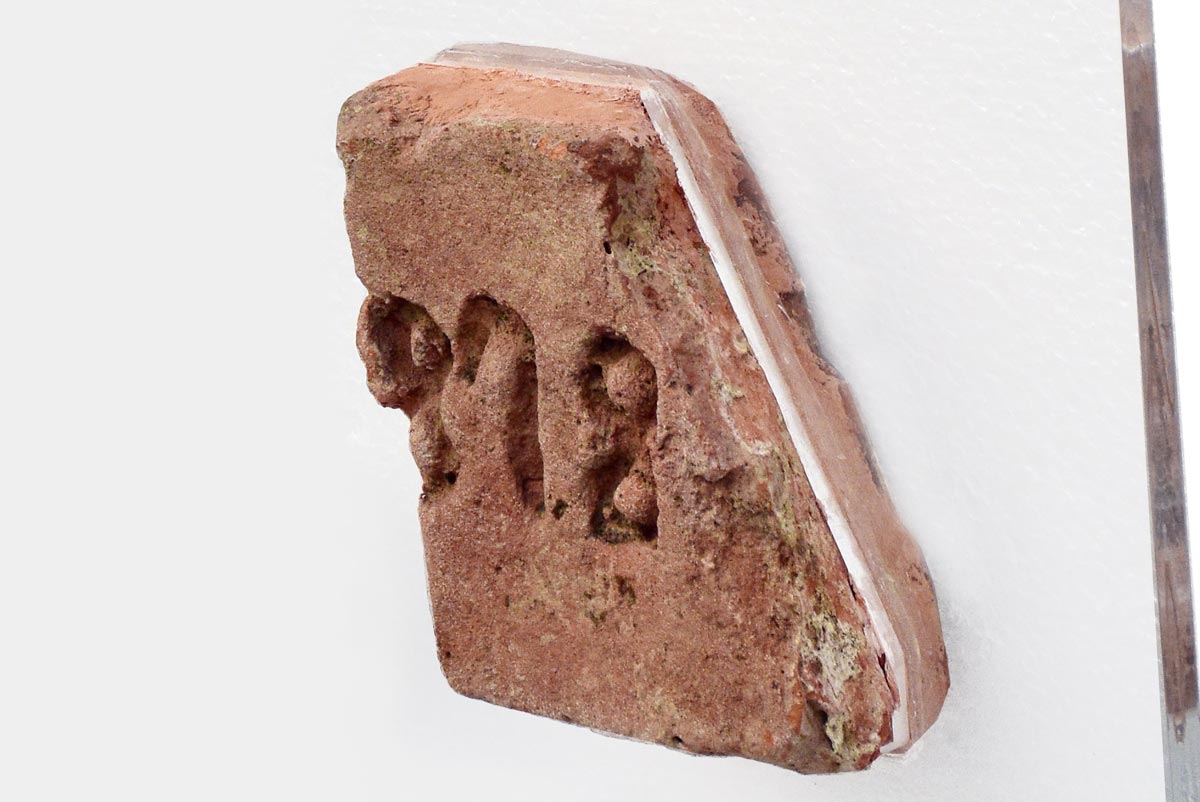 Next is a piece of brick inserted into a transparent acrylic panel to make it look as if it was soaring in the air. Next to it, on a stainless plate, is an attached certificate of authenticity. The upper part of the panel has a stainless plate with the text of the decree of the Verkhovna Rada of Ukraine (The Parliament of Ukraine) on renaming the village. The order was issued after Penny Sue Pritzker’s visit to the ancestral village in 2015. The current name of the settlement sounds closer to the Ukrainian pronunciation of the Pritzker’s family name. 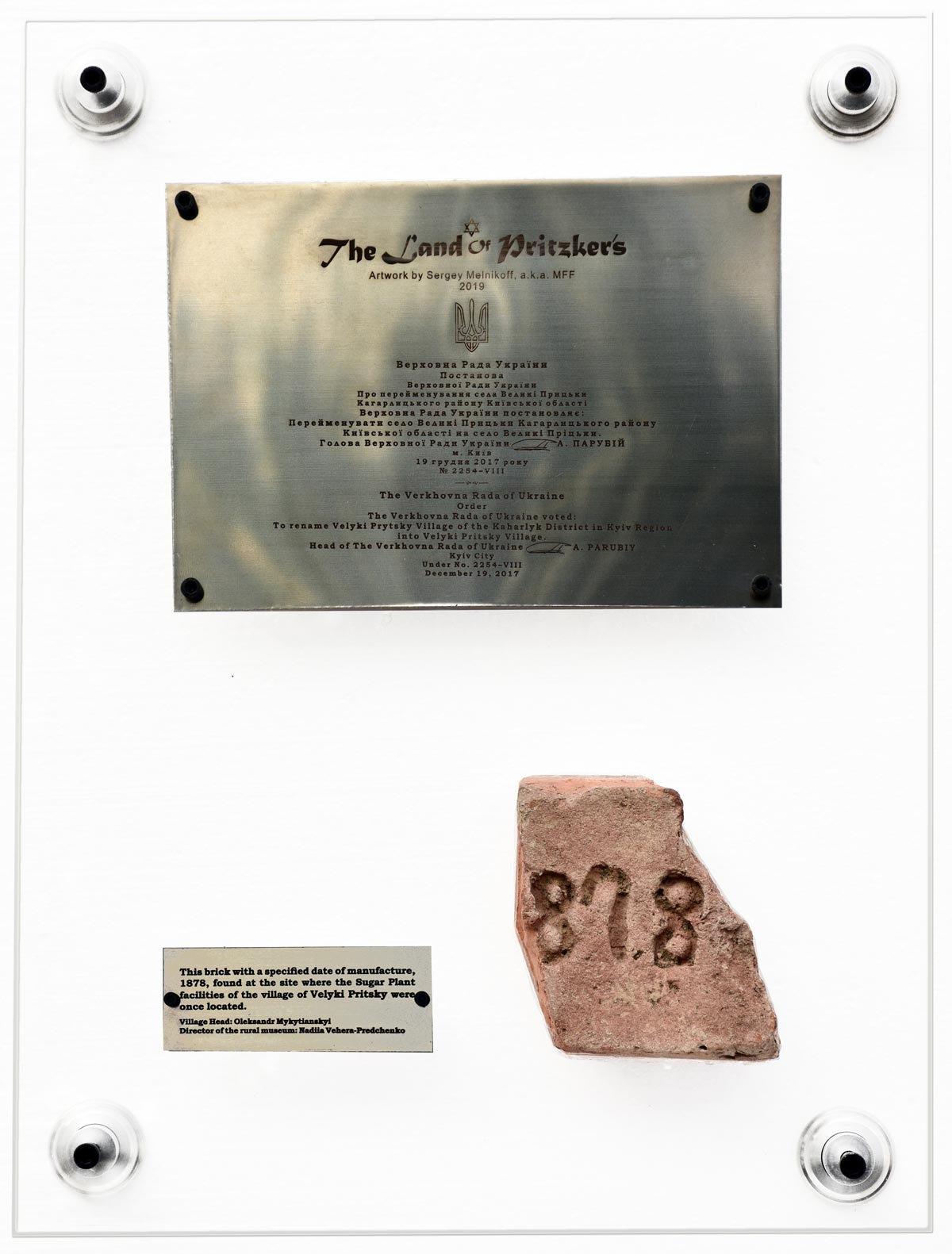 Above the panel, there is a second plate of acrylic glass with engraved quotes from the wise men. They were previously written on Penny’s youthful photograph from when she was 15 years old. So, in this way, a distant Penny’s past reminds about itself like the strings of the divine harp under the fingers of the guardian angel. 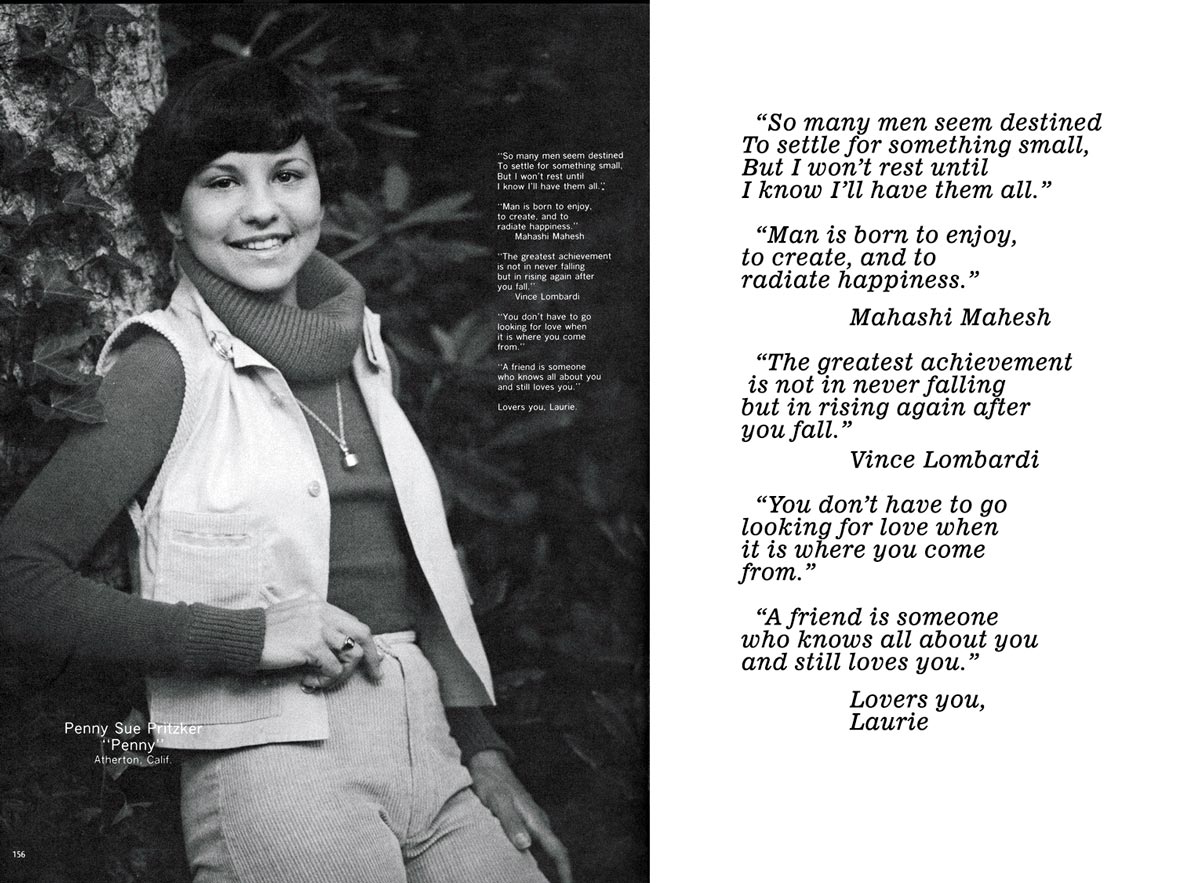 The original work, «The Land of Pritzker’s,» consists of five elements, covering an area of 45 square feet (4 sq. m.) The total weight of all the panels is over 110 lbs. (50 kilograms).

The two patriarchs of Ukraine, — among whom is the legendary scientist Dr. Boris Paton — the current president of the National Academy of Sciences, who turned 101 years old, and the Ukrainian Apostle His Holiness Patriarch Filaret, addressed a deeply symbolic art to the Pritzker dynasty on behalf of the Ukrainian people.

The author of the idea and work is the most-titled modern photographer, an American Sergey Melnikoff, aka MFF.

For this project’s implementation, the ruler of the Ukrainian Orthodox Church, Patriarch Filaret awarded the artist with the Order of the Holy Equal-to-the-Apostles Prince Volodymyr the Great. 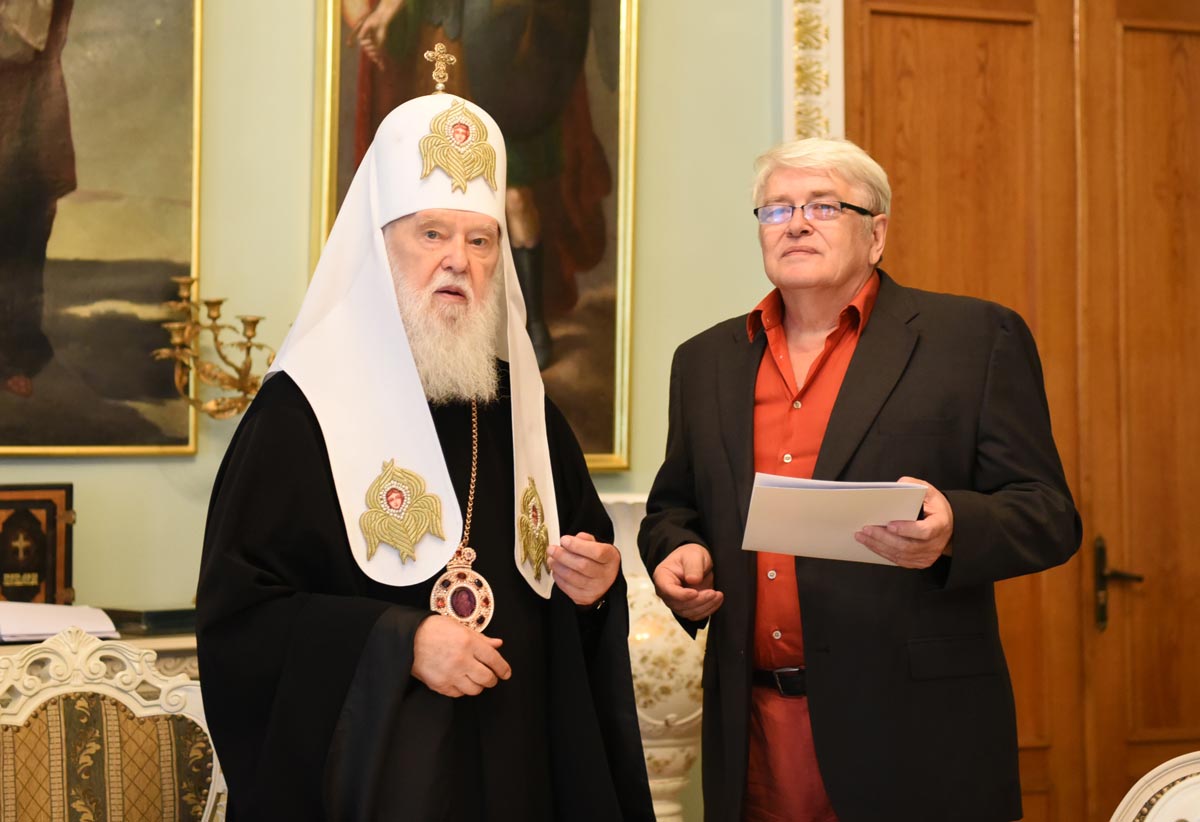 In the photo: Patriarch Filaret awards Sergey Melnikoff with the Order of the Holy Equal-to-the-Apostles Prince Volodymyr the Great of the Second Degree. The Patriarchal Residence. Kyiv, 2019 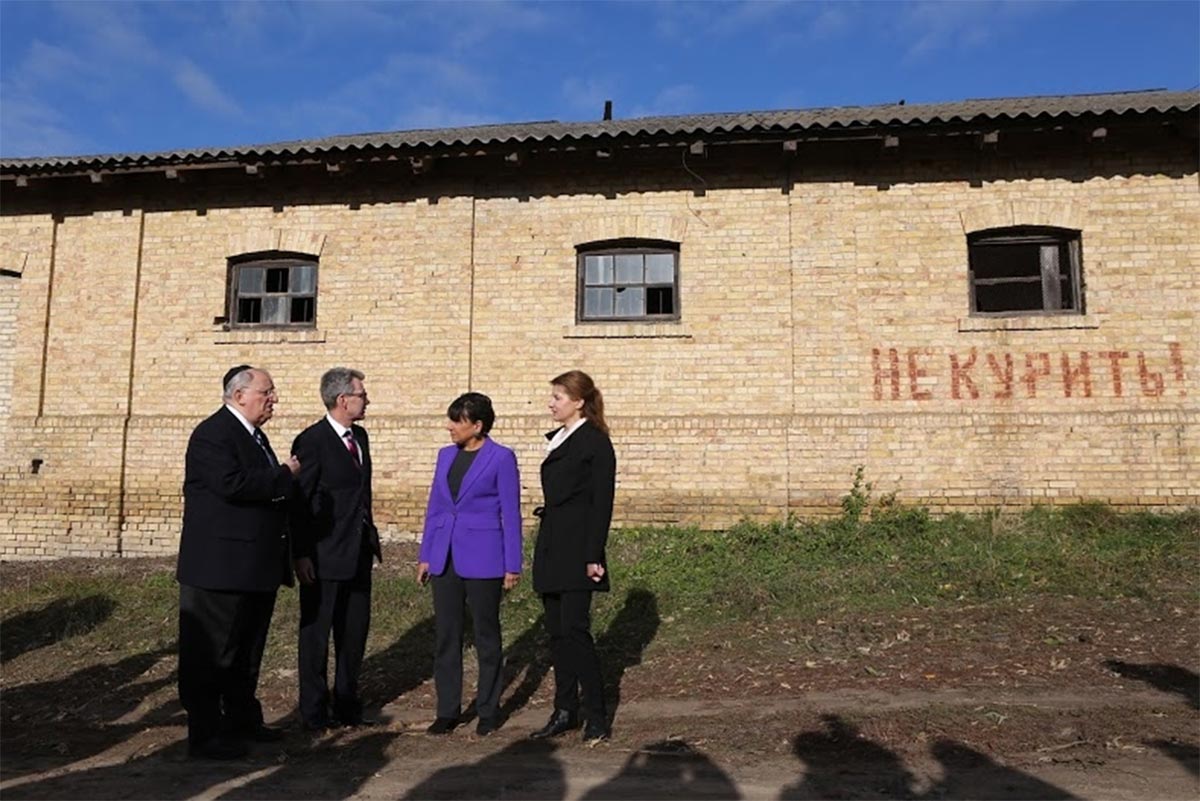 In the photo: US Secretary of Commerce Penny Pritzker visited the Ukrainian village where her Jewish ancestors lived in the 19th century. Marina Poroshenko, the wife of Ukrainian President Petro Poroshenko, and Geoffrey Pyatt, the US ambassador to Ukraine, accompanied Pritzker on her visit to Velyki Prizki 55 miles southeast of Kyiv. Velyki Prizki, 1915

✦ Tatiana Alexandrova | «THE LAND OF PRITZKER'S» in PDF format.