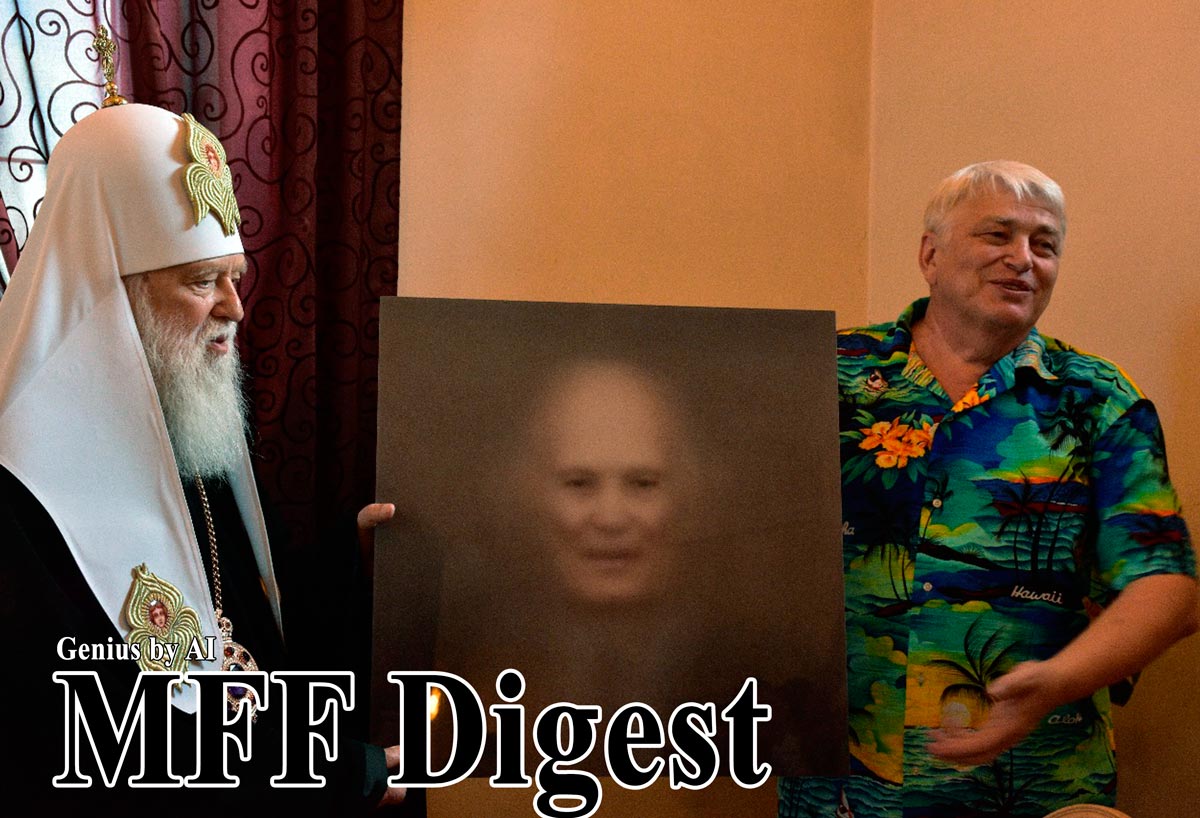 In the photo: Patriarch Filaret and Sergey Melnikoff, aka MFF, demonstrate the first photographic portrait of a living human created by the Artificial Intelligence.

The unique photo portrait of a living human was created by the Artificial Intelligence for the first time. The photo entitled «Genius» presenting the portrait of the Academician Boris Paton has been made within the framework of the special project by Sergey Melnikoff, dedicated to the 100th anniversary of the legendary Ukrainian scientist. 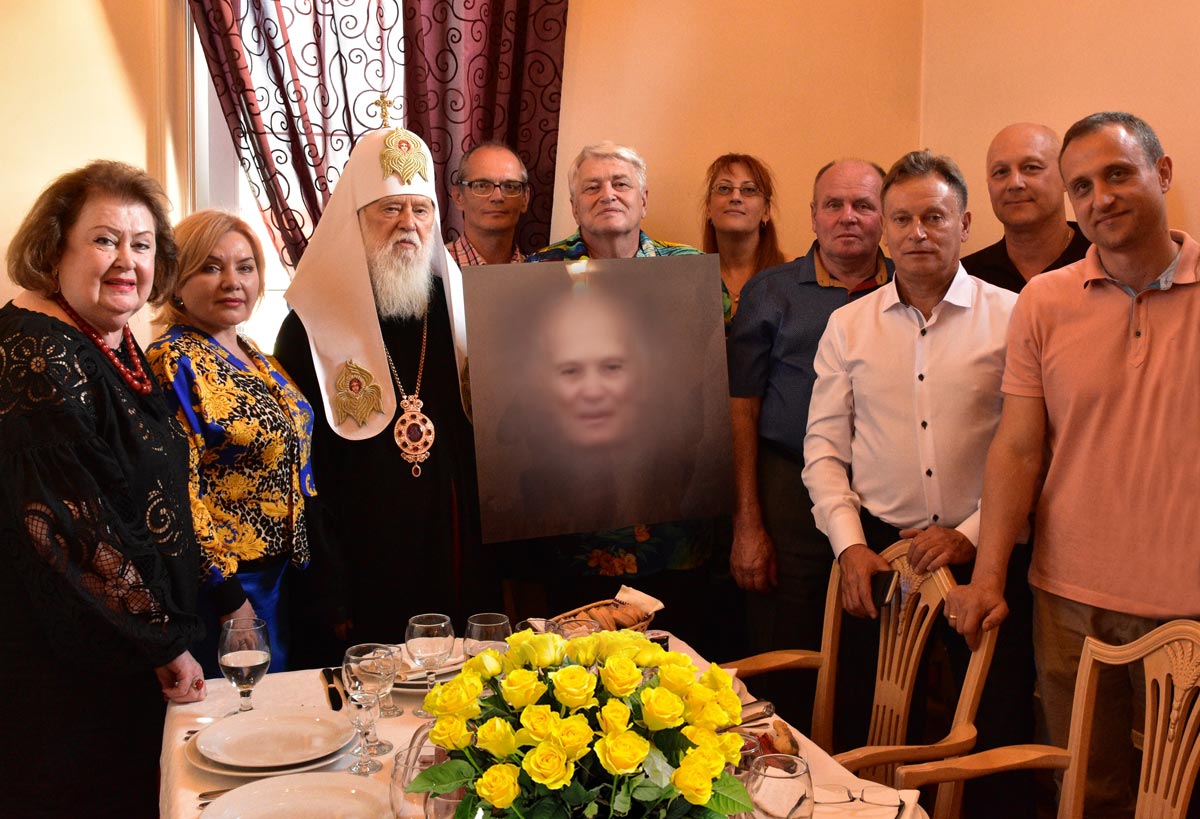 In the photo: Members of the «Soul of Ukraine» International Charitable Foundation at a party in honor of the 100th anniversary of Boris Paton demonstrate the portrait «Genius», which was created by Artificial Intelligence. Brovary City, 2019.

Sergey Melnikoff, an American photographer-artist and the author of the idea of creating the portrait, recounted his story at the National News Agency of Ukraine — the scene of the first public presentation of this exceptional work of art:

— «The Genius» portrait constitutes the final stage in the realization of a large-scale cultural project which entailed the developing of a special machine algorithm for the Artificial Intelligence to process several thousands of Boris Paton’s photos taken throughout 100 years of his lifetime, from 1920 to this day. A supercomputer was given the task to make a generalized picture of a scientist of genius of the XX – XXI centuries, proceeding from that huge collection. The Ashmanov Neural Networks IT-company from Russia’s Innovation Centre in Skolkovo worked with the initial array of photographs. 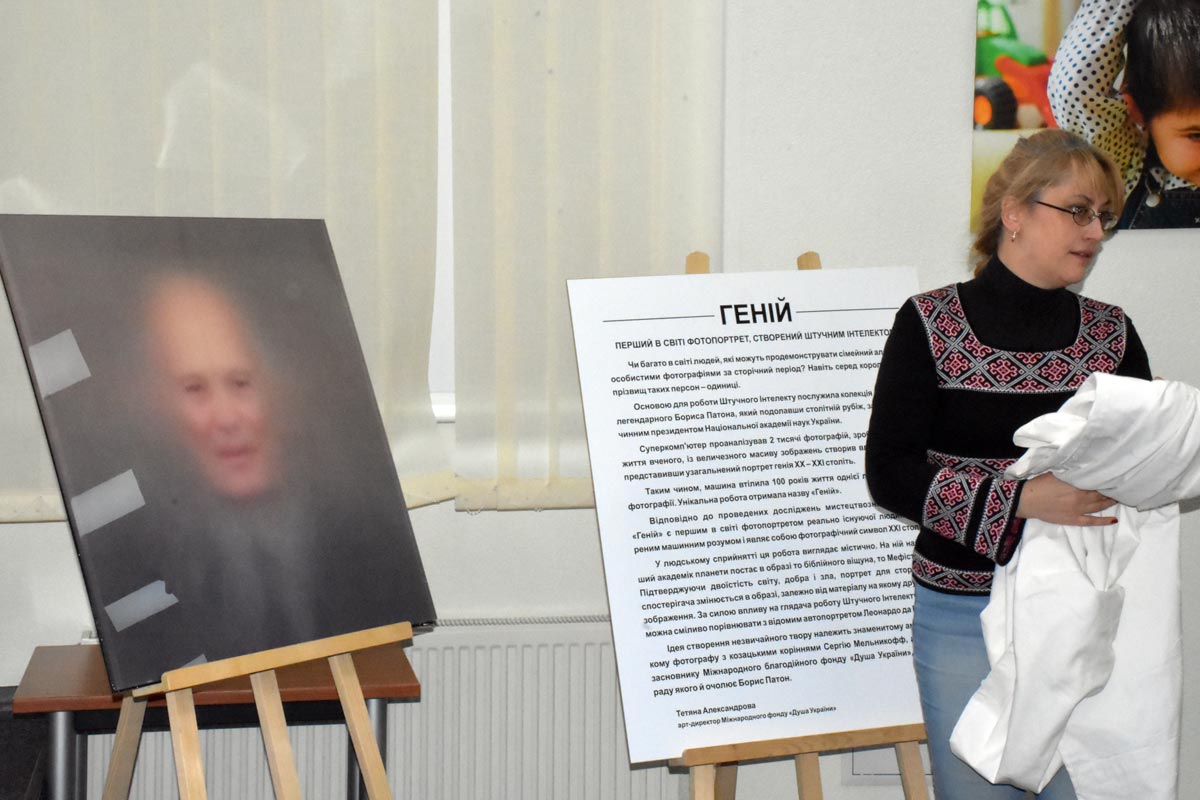 In the photo: Tatiana Alexandrova, the art director of the «Soul of Ukraine» Foundation, presents the portrait «Genius» at the National News Agency of Ukraine — UKRINFORM. Kyiv, 2019.

Speaking at the portrait presentation, Irina Klimova, a Ukrainian artist, arts critic and the Director of the Sholem Aleichem Museum Kyiv, pointed out the unprecedented abilities of the Artificial Intelligence which created an outstanding work of art capable of becoming the photography symbol of the XXI century.

— An amazing portrait has been born. This is the portrait of a human who, depending on our attitude towards him or our point of view, can create a new and multifaceted image. The picture emanates an unusual glow which used to be only achieved by means of fine arts handled by people. Now a machine has managed to create a highly emotional and impressive work. Depending on the lighting and the spectator’s angle of viewing Boris Paton’s photo portrait presents either a Biblical wise man or Mephisto. This is a work of art indeed — Irina Klimova emphasized. 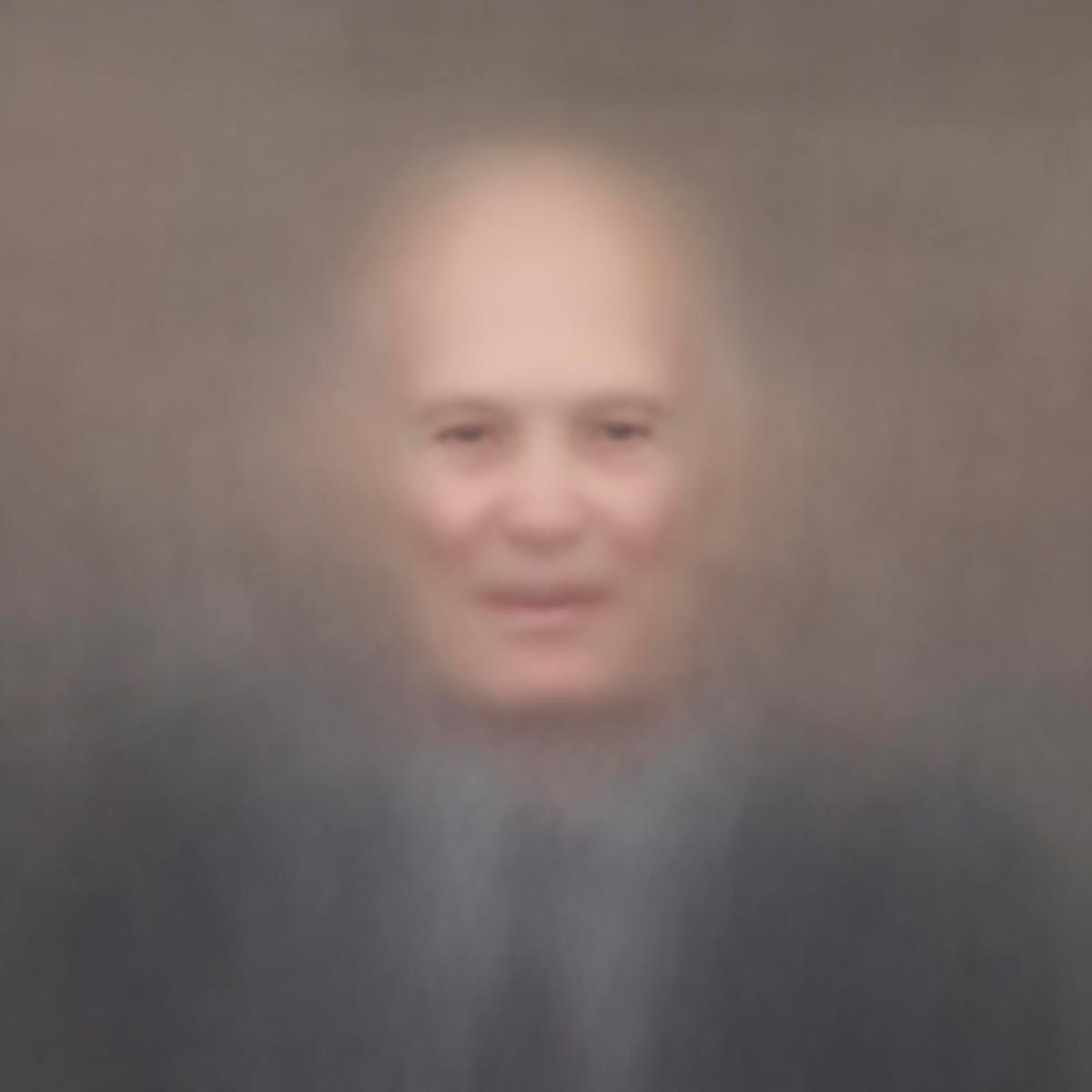 In the photo: «The Genius.» The first photographic portrait of a living human created by the Artificial Intelligence.

Boris Paton is a legendary scientist, the first Hero of Ukraine, the creator of more than 400 inventions and the &#171father of welding». Dr. Paton was a man of the epoch: metallurgist, engineer, inventor, scientist and academic. Under his leadership, a new welding process — electroslag was created. The scientist also owns research and development in the field of welding in space and underwater, as well as the introduction of welding in medicine. At his initiative, the world’s first welding of living tissues was carried out, and this technology is used today for thousands of surgical operations. Boris Paton is compared to Henry Ford and Nikola Tesla.

MELNIKOFF Entertainment | ✦ «THE GENIUS» PORTRAIT AT THE UKRINFORM PRESENTATION

Dr. Boris Paton (1918 – 2019), Professor, the USSR Hero of Socialist Labour (twice), the first Hero of Ukraine. President of the National Academy of Sciences of Ukraine (1962 – 2019). Since 2014, Dr. Paton was headed of the Trustee Board of the «Soul of Ukraine» International Charitable Foundation.